I'm walking down rain-soaked streets and see all of the cars and streetlights being covered with plastic covers by men in haz-mat suits. I wonder what is going on. Something tells me it is to protect them from the chemicals that will be raining down from the sky that can melt or damage everything. I go inside and its kind of an art gallery or hotel and the same people are covering the lights and artwork with special protective coverings. I'm looking around and noticing spots they missed and wondering why they would go to all of that trouble and then not even do it thoroughly.


I had this dream last night and then my husband comes home today to tell me that National Geographic is coming to the nuclear site where he works to do some filming. I decide to do an internet search to see what interest they have there and found an old article: Nuclear Power, Risking a Comeback from 1996. In this economic impact study Economic Benefits of Grand Gulf Nuclear Station, nuclear power is touted for being cleaner and emitting less greenhouse gases than its fossil fuel counterparts: "Nuclear power is one of the cleanest conventional means of producing electricity. Grand Gulf operations avoid significant greenhouse gas emissions that otherwise would be generated if the same amount of electricity were produced by fossil fuels. In 2004, Grand Gulf avoided the emission of 48,000 tons of sulfur dioxide, 16,000 tons of nitrous oxide and 9.4 million tons of carbon dioxide. Sulfur dioxide can produce acid rain, and nitrous oxide is a precursor to ground-level ozone." The interesting thing here, too, is that Grand Gulf is the plant my husband will be most-likely heading to next. Hmmm...I guess my dreams are telling me to start paying attention to this!
Posted by Unknown at 7:43 PM No comments: Links to this post

I have been reading the book "Conscious Dreaming" by Robert Moss for a while now (I read a little here and there when I have time so it's taking a long time to get through it). Mr. Moss often talks about using Shamanic Drumming to get into the dreamscape and even for "waking dreams". I decided to try this out today and found a nice YouTube video called Shamanic Journey Meditation to talk me through. It was difficult since I was in the middle of my day with Isaac (my three-year-old) on my lap listening with me and Liliana (my 8-month-old) next to me playing, but I thought I'd just listen to see what would happen anyway. The voice of the woman instructs you on a visualization to help you ask a question and to find your guide or "power animal". I was frequently interrupted to answer questions from my son and to acknowledge my daughter so I figured that was going to prevent me from seeing anyone or anything, but at the end I was able to get a quick glimpse of my "spiritual helper". I quickly visualized the outline of a wolf's face!

My inquiry was how I could get my mind in order and to see what I needed to focus on and how to deal with our current financial difficulties (too much week not enough money). I decided to look up the "wolf power animal" (as I have no prior knowledge whatsoever of "power animals" and what the "wolf" would symbolize and was given this description (kinda eerie!):

Read about your "power animal" or "spirit guide" here.

The wolf has been much misunderstood and maligned in history and is not the vicious intruder of western fairy tales.  The wolf is a shy, yet very sociable creature with strong rules of behavior.  Fear of the wolf is perhaps born when its eerie howl raises the hackles on our neck and in our souls.   Maybe we do not fear the wolf at all, but only the wild nature within ourselves.  To American Indians, the wolf is said to be "teacher" medicine. We study wolfs ways of hunting and their social structure.  The wolf is associated with the Dog Star, Sirus and some cultures belief humans came from this distant star.  Wolf populations are threatened in the lower 48 states, but abundant in Alaska and Canada.  Wolf has much to teach us, if only we will listen.
WOLF MEDICINE

Wolf is a carnivore and lives in many areas such as, thickets, holes, and caves , called dens. Gray wolves, also known as Timber Wolves can be found in Northern Europe, Canada, Alaska and Russia. This wolf can also be found in the Northern United States.  The diet of wolves consists of vulnerable animals, such as, weak, sick, young or old prey. Depending on wolfs location its prey is white-tailed deer, moose, beaver, hare and other small mammals. Wolf requires at least 5 lbs of meat a day to survive. However wolf does not eat everyday. There are plenty of lean times before a feast of plenty. Wolf is an intelligent social animal with extremely keen senses. Its ability to survive depends on the total cooperation of the pack.
Wolf’s behavior is established upon a hierarchical structure. There is a definite order of rank. The leader of the pack is called the Alpha male and his mate is called the Alpha female.  Each wolf knows it place and responsibilities. Wolf has a complex method of communicating which involves body language and vocal skills . If you have a problem in expressing your thoughts, needs or ideas to others, take time to study wolf. Wolf’s message will teach you how to enhance your verbal communication skills with the appropriate body language.

Wolf’s medicine will help you gain your objectives through cooperative endeavors. Wolf’s message is the power to teach and share information. If Wolf has entered your life it is time to share knowledge by teaching, writing, and lecturing. Now is not the time to push ahead on your own. If you are experiencing family problems or conflict at work, try meeting with the whole "pack" to resolve difficulties.
Posted by Unknown at 3:25 PM No comments: Links to this post

Dreams of traveling down waterways/waterslides with groups of people. In my dreams (I had this one again last night and have had similar ones before) it is a form of travel. It isn't on a boat or any other type of flotation device. It's more like canals and slides of rushing water. Instead of roads and cars, people float on these, but I never remember anyone being wet???
Posted by Unknown at 8:33 PM No comments: Links to this post

Email ThisBlogThis!Share to TwitterShare to FacebookShare to Pinterest
Subjects I Blog About travel dreams, water dreams

Legend of the Dreamcatcher

Posted by Unknown at 9:33 PM No comments: Links to this post

Email ThisBlogThis!Share to TwitterShare to FacebookShare to Pinterest
Subjects I Blog About dreamcatcher, native american legend

I just woke up from a dream of furry penguins coming to Louisiana as strays in container trucks. I was at a construction site and the little things were waddling around and getting burned by fire. They were DYING and I was mortified. I was looking around for someone to do something and couldn't believe they'd just walk into the fire...didn't they know they'd die??? Upon waking, I felt that somehow the dream had to do with my animal rescue aspirations and looking around for someone else to do something just isn't what I'm supposed to be doing.
Posted by Unknown at 4:33 AM No comments: Links to this post 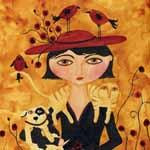